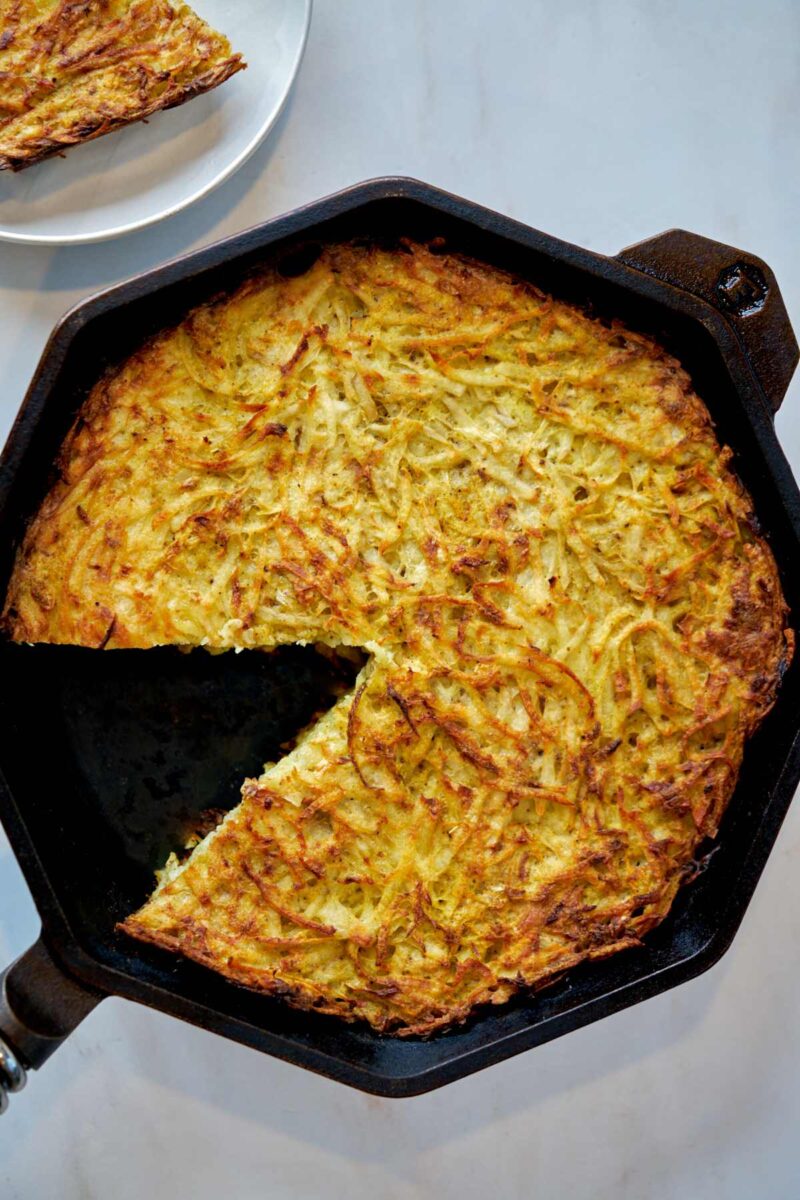 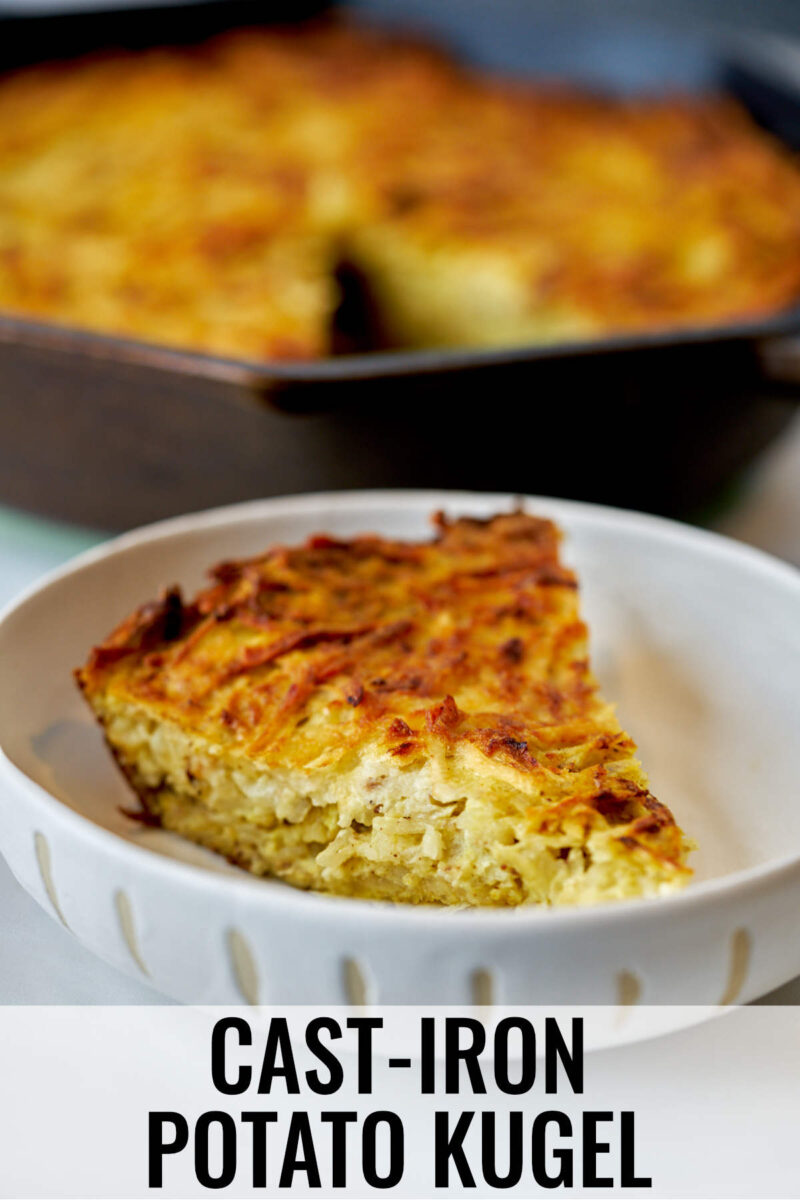 Potato kugel is a hearty potato casserole dish with a crispy baked top, kind of like a hash brown cake. With onions, egg, and light seasoning, it's the best easy recipe to satisfy your need for a warm, comforting meal.

Baked in cast iron, nothing beats the crunch and crackle married with a tender inside!

Why this Recipe Works

This post contains affiliate links where I might receive a commission if you make a purchase, at no additional cost to you. Thanks for your support!

Baking kugel in a cast iron pan isn't traditional, but it is the best way to get a crispy outside. This recipe uses a 10-inch cast-iron skillet.

A potato bake is always a delicious recipe, and potato kugel takes it to the next level. It's the ideal combination of fluffy inside and crispy on the outside, with simple flavors that pack a punch.

You only need a few simple ingredients and a bit of know-how to make a perfect potato kugel. You assemble the ingredients in one pan and leave to bake with minimal interfering from there.

There are two pro tips in this recipe: add boiling water just as you put the kugel in the oven, and broil the kugel for a couple minutes at the end of the bake to help guarantee that amazing crispy top.

Onion - yellow onions are preferred. Grate or shred the onion using a coarse grater or the grater in a food processor. This helps the onion flavor and integrates the onion seamlessly with the kugel's texture

Russet potatoes - these are preferred as they have a high starch content and are perfect for kugel. It's essential these are grated, and as much water is squeezed out as possible to prevent a soggy kugel

Salt - I use pink Himalayan salt here, but other types of salt will work. Always season to your own preference

Potato starch - you can also use cornstarch

How to Make Potato Kugel

Start by pre-heating your oven to 450F. Place the cast iron pan inside the oven and heat it up for 10 minutes.

To begin prepping the ingredients, peel and shred your potatoes and onions. I use a food processor to make this step faster.

Use a tea towel, cheesecloth, or even just your hands, squeeze as much of the liquid out of your potatoes as you possibly can, and discard the remaining liquid.

Transfer the potato kugel mixture to the the heated cast iron pan. Be careful, the pan is hot!

Using the back of a spoon, press the mixture down into the cast iron pan to compact it. Then, pour the boiling water over the top and immediately place it in the oven.

Note: Adding the boiling water to the pan just as it enters the oven to help properly steam and cook the potatoes for the perfect, fluffy texture inside.

The final step is to set your oven to broil, and broil the potato kugel until it has browned on top. This should take about 3 minutes. Let it rest for 20 minutes before cutting and serving.

A kugel is a baked casserole, which can be sweet or savory. Kugel is a Jewish dish, served in Ashkenazi Jewish households on special occasions such as Yom Kippur or Rosh Hashanah. Noodle kugel is a sweet dish with sour cream and cinnamon, while potato kugel is a savory version with grated potatoes as the main ingredient instead of noodles.

Will the broiler burn my potato kugel?

This can happen and will happen quickly if you set your oven to high broil. While broiling, it's best to keep a close eye on the kugel and remove from the oven as soon as it browns.

Can I use a box grater to grate my potatoes?

You definitely can, but this will be more time-consuming and harder on your hands. I prefer to use the grater disk of a food processor as it's quick and easy.

Does it matter which cast-iron pan I use?

It pays to use a good quality cast iron pan in your cooking. I use this Finex cast iron with lid ($280). If you are looking for a less expensive option, then the Lodge cast iron skillet ($35) is wonderful.

If you're a fan of this Jewish recipe, these great recipes are sure to become your new favorites.

★ Did you make this recipe? Please give it a star rating below!★ 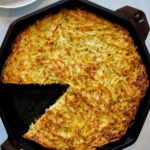 Baking kugel in a cast iron pan isn't traditional, but it is the best way to get a crispy outside. This recipe uses a 10-inch cast-iron skillet. Squeezing the liquid out of the potatoes and then adding boiling water helps make sure the correct amount of liquid is added to the recipe. It also replaces starchy water. Be sure to watch the kugel when broiling. It can burn quickly.

This blog is a place for you to learn what foods feel good to you. It’s a place to experiment, discover, and have fun. I started Proportional Plate because I want people to stop feeling guilty about their food choices. Let’s make food that feels good!